Journalism, the news, the media, has changed. Largely objective information is hard to find. The trustworthy reports of people like Walter Cronkite are mostly gone. The papers and the airways are filled with highly opinionated, predictable and partisan narrative. If this has gotten old to you, we think you might like our approach.

The Diagnostic Journalist works to bring fact driven, unbiased stories that will help you better understand and evaluate your positions on the issues. Unlike most outlets, we will not report on everything. There is plenty of that now. Instead, we prefer deep dives and thorough analysis. We are selective. We try to focus only on areas where we can contribute. We will seek the opinion of experts from both sides, but we also apply the tools of proper diagnosis to the issues we write about.

You may see this as investigative reporting. We contend this is a completely new form of journalism. Investigative reporters try to uncover a crime. They are looking for someone to blame. Their sensationalism can be appealing, but they rarely study chronic problems with the methodologies that actually reveal root causes, and lasting solutions. This is our goal. If you enjoy what we do please Join the Movement. You will be alerted when we post new material.

Who Really Deserves Credit for America's Decade of Jobs Growth?

​As election stakes spike, and COVID-19 driven joblessness persists, debate over who is best qualified to restore economic stability intensifies. The candidates and their supporters justify their contentions by claiming credit for the pre-pandemic economy. President Trump boasted, “we created the greatest economy in the history of this country”; as his predecessor retorted, “the Obama, er, Biden administration…” created more jobs, and was responsible for “the longest streak of job growth in American history.”

The election will be decided by citizens in the middle looking for truth. The answer to this economic question is still important to undecided voters. Most would like to bet on the team most likely to help all win. They are looking for intelligent information and objective analysis.

One such, seemingly reasonable, conversation between Fox’s Neil Cavuto and Obama cabinet member Austin Goolsbee had the former saying, “On the economy; I always argued that both men could take a bow…” and the latter ending with “hats off to both of them.”

While refreshingly civil, it is clear to me that people are still missing the obvious. Neither administration deserves accolades. Something else was responsible for the decade of jobs.

Baby Boomers, Father Time and American business deserve the real credit for over 100 straight months of job growth. Shortly after the recession peaked, in 2010, the children of the Greatest Generation started turning sixty-five. Seventy-five million boomers began leaving the workforce at a rate of about 10,000 people per day, or 3.6 million per annum. This produced an employment vacuum for others to fill. Political action did not make this happen. It was going to happen, recession or not.

We have averaged 190,000 new private-sector jobs per month since then. This sounds great, but it does not even fill the void created by exiting seniors! Retirees leave 300,000 jobs open each month. Recent graduates, and the chronically unemployed should thank boomers, not government, for abundant jobs and higher incomes.

Even if one ignores this demographic impact, basic mathematics also explains the decade’s level of job creation; and, it reveals the heights we could achieve. To understand what a strong economy truly looks like – let us start by estimating the number of jobs each percentage of growth should generate.

While not fixed, it takes time for the ratio of employees to sales to change significantly. Companies add associates at roughly the same rate their revenues grow. On average, businesses hire about 1% more employees for every 1% of additional sales.
​
The Gross Domestic Product is simply the aggregate of American businesses. Our workforce organically grows at the rate of overall expansion. One-percent GDP growth supports a one-percent bigger workforce. At 150 million U.S. workers, this creates 1.5 million jobs. Over the past decade, the nation’s economy grew 1.5% annually. Such growth, should create 2.7 million jobs a year, or 225,000 every month; almost twenty percent more than what we saw.

The result highlights the lack of performance by each administration. At best, the decade of jobs growth equals expectations during periods of stagnation. There is no reason to believe it came from great leadership, smart policy or successful government programs.

The decade’s economic growth rate was steady, but half the historic average of 3%. Two hundred thousand jobs per month are better than nothing, and superior to going backwards, but we grew at a subpar rate, particularly when one considers that we came out of a deep ditch. Any objective, statistically-driven economist, would consider both Presidency’s performance, lackluster.

Just as it is easier to raise a basketball players’ free-throw percentage from 50% to 80% than it is to go from 90% to 95%; we should have been able to grow the economy much faster (and create millions more jobs), particularly, in the years immediately following the recession. 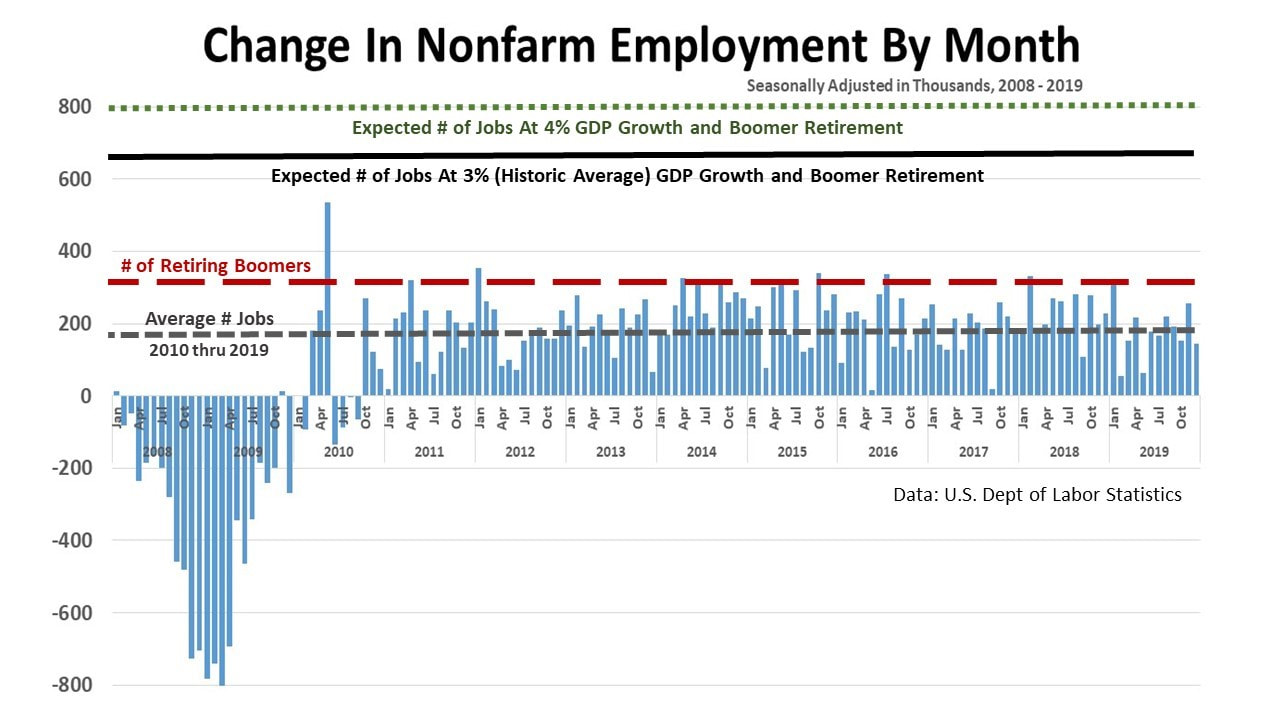 These administrations restrained prosperity. They did not help make American business more globally competitive. Increasing the National Debt by $10 trillion apiece did not help the people prosper, or create employment. Trade wars did not net more jobs, raise incomes or end poverty. No, the decade of new jobs is explained by demographics and mathematics. Thank God we recovered, but the gains came from good timing, not great policy, from either administration.

Before the pandemic, everyone was thrilled that most of us were working, but the truth is, the period should have been much better. We should not be excited by anemic growth rates. It is possible to achieve two to three times these levels. Strong economies expand four percent or more each year. Such rates would net 500,000 jobs monthly. Combined with retirees, we would need 10 million new workers each year – for the next 10 years! Imagine what this would do to incomes, employment, and how it would alter the hostile immigration narrative.

If you are unemployed, there is reason for optimism. Boomer retirements continue through 2030. Once we get the pandemic under control, we should see another decade of job creation. That is, if the next administration, whoever that may be, does not tamper with the economy too much.
​
Our politicians break their arms patting themselves on the back. The data, however, shows that we do not have masterminds leading our economy or that actions similar to those taken during the last recession will maximize prosperity for all in the years ahead. It is important we learn the right lessons, and that we begin electing people who grasp what does and does not drive business growth, more jobs and higher incomes. Maybe next election, we will get candidates who do.